My husband Dave promised my daughter Finlay a dog before she turned 11. I did not want a dog. Especially, the added responsibility of a dog. Our days were too busy already, and keeping the house clean was a battle we had lost three children ago. "Not to worry," my husband assured me.  He would take care of the dog!  They would go running together each day! It would be great for the kids to learn to take care of the dog!  I knew the reality was the work would fall to me, so I held my ground, no dog.

Dave went rogue. Determined to meet the 11th birthday deadline, he started calling every breeder in North America to find us a Lab. It turns out, locating a puppy on short notice isn't easy. Dave grew up in a family-owned animal hospital where his father and grandfather were veterinarians, and his grandmother and mother ran the practice. His family had adopted animals abandoned at the clinic his whole childhood, and he had always wanted to have a puppy. Two weeks before Finlay's birthday, Dave receives a return call from a breeder who unexpectedly has a puppy available. If we want the dog, we have to drive to New York State to pick him up ASAP.

In my last act of protest, I refuse to go on the cross-border road trip. Dave and my sons set out to pick up the dog whom Finlay decided to name Wyatt. To make a long story short, I am happy my husband and children ignored my protests because Wyatt has been the best addition to our family.

The puppy phase had its challenges, ravaged furniture, accidents, the demise of the living room rug, but Wyatt was just so darn cute it was impossible to be mad. We had strict rules in the early days, not on the furniture, not on the beds, always spending the night in his crate. Needless to say, we have caved, and he now sleeps like the prince he is at the foot of the bed. 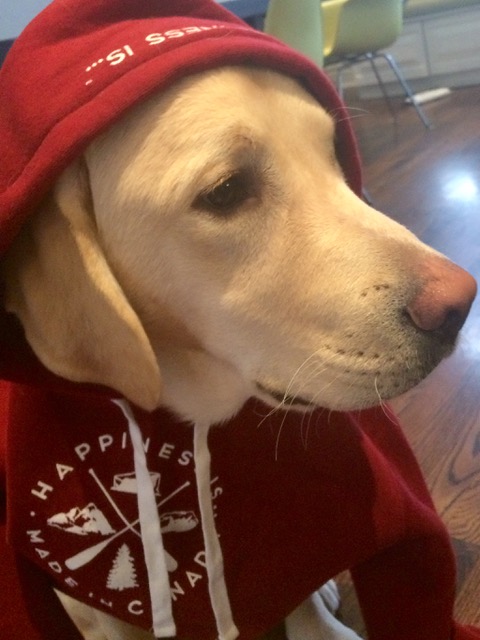 He has taken on human tendencies. He is a terrible nag when he wants to get out for a run, or it is dinner time. He has taken to incessantly swiping his metal bowl with his paw at 3:00 pm for dinner. He is brilliant at reading a room. If a child needs comfort, he is there. If I am working from home and have cold feet, Wyatt is happy to lie on them. Dave tells me he is finally getting the enthusiastic greeting he deserves at the end of a long day at work. When we are out, Wyatt can be found watching out the front window, his head resting on the window frame waiting and watching for us to come home. He is a great friend, therapist, and companion.

Like anybody, he has his failings. He likes to eat dead things at the park and recycle them in the backseat of my car. If you leave anything within striking distance on the counter, it will be finessed with paws right down his trap, butter, cheese, and bread are favourites. He has had his stomach pumped for eating the compost bin and its contents. All acts were quickly forgiven, except the squirrel in the backseat, that one took a little while and still turns my stomach.

Wyatt is always happy, and he has brought so much happiness to our family. There is nothing better than his front door greetings, his tail wagging so hard his whole body shakes.  In these strange times, I can't imagine not having him around. He is living his best life with plenty of walks and cuddles and dairy products left on the counter.

I am "that" pet owner now. I can't get enough of dog videos, and dog twitter feeds. By the way, you have to check-out Thoughts of the Dog @dog_feelings  and @MrAndrewCotteron Twitter. I will leave this letter with a reflection from @dog_feelings on our current situation.

Thoughts of Dog… the human has been working from home for the last couple of days. And every so often they let me participate in the video calls. All the other humans cheer when they see me. I am the only one holding their company together. 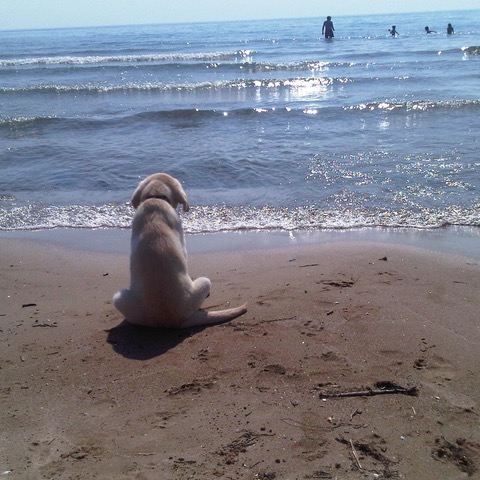